Protecting and Mitigating Against DDoS Attacks 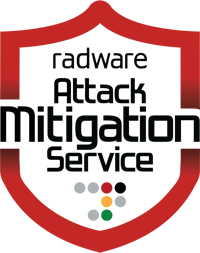 Radware's Attack Mitigation System (AMS) is a real-time network and application security solution that protects the application infrastructure against network and application downtime, application vulnerability exploitation, malware spread, information theft, web service attacks and web defacement. AMS is a set of patented technologies for the most advanced internet-borne cyber-attacks. It extends the "network" of attack detection and mitigation capabilities beyond the data center for:

What Does DDoS Attack Mitigation Service Do?

Organizations are challenged by an evolving threat landscape resulting in reduced revenues, higher expenses, and damaged reputations. The number and complexity of cyber-attacks such as DDoS is continuously increasing.

Radware's hybrid DDoS Attack Mitigation Service combines the requisite technologies for making your business resilient to cyber-attacks. It integrates on premise detection and mitigation with cloud-based volumetric attack scrubbing and is offered with a simple subscription pricing model.

DefensePro, Radware's on premise defense component, ensures that the datacenter is constantly protected by providing accurate real-time detection and mitigation of multi-vector DDoS attacks, which is not possible using only a cloud based DDoS solution.

Traffic is diverted to DefensePipe, Radware's cloud-based scrubbing center, during volumetric attacks when the enterprise's Internet pipe is about to saturate. This enables smooth transition between mitigation options assuring immediate protection with no disruption gaps or adding to scrubbing center latency.

DDoS Attack Mitigation Service includes active monitoring and health-checks on the protected service or application, pipe saturation monitoring and customer notification pre saturation. Reports of all attacks mitigated are available on a web-based service portal. When Radware's ERT is involved in mitigating an attack, a full post attack analysis report is provided.

A hybrid attack mitigation service guarantees that traffic is diverted to the scrubbing center only when the enterprise's Internet pipe is about to saturate. It clears attack traffic before it reaches the company's Internet pipe, protecting against downtime and service degradation.

Organizations are challenged by an evolving threat landscape that reduces revenues, increases expenses and damages reputations. Today's cyber-attackers use sophisticated methods ― often multiple attack-vectors in the same attack campaign ― to bring down datacenters and organizations' web presence. The simplicity of launching such cyber-attacks and variety of attack tools available are reasons why more organizations are suffering from increased attacks, such as DDoS.

The Age of the Integrated Hybrid Solution

Radware's hybrid attack mitigation solution combines the requisite technologies for making businesses resilient to cyber-attacks with on-premise systems and the ability to scale on demand with a cloud based scrubbing service. 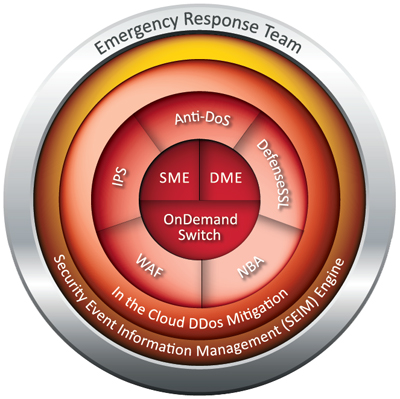 By protecting enterprises against known and emerging network and application threats in real-time, Radware's layered approach is designed to help organizations mitigate attacks that can be detected and offer a security solution that combines detection and mitigation tools from a single vendor. Radware's solution provides maximum coverage, accurate detection and shortest time to protection.

To mitigate network attacks that threaten to saturate the Internet pipe, Radware's attack mitigation solution includes a cloud based DDoS scrubbing service that works in sync with on premise attack mitigation devices.

Enhanced with a central monitoring and reporting system, the solution provides on-going unified situational awareness of the network and applications using a single security event information management (SEIM) engine for all components.

During long lasting attack campaigns where the system cannot mitigate all attack vectors out of the box – Radware provides the support of its Emergency Response Team – a team of security experts that provide 24x7 real-time security service to help customers restore operational status under attack.

Radware's on-premise attack mitigation device ensures the datacenter is constantly protected by providing accurate real-time detection and mitigation of multi-vector DDoS attacks which is not possible using only a cloud-based DDoS solution.

Only in cases of volumetric attacks, where the organization's Internet pipe is about to saturate, is traffic diverted to Radware's cloud-based scrubbing center where attack traffic is cleared before it reaches the company's Internet pipe. This enables a smooth transition between mitigation options assuring immediate protection with no disruption gaps and without adding the scrubbing center latency.

Only 15% of DDoS attacks handled by Radware's ERT saturated the Internet pipe1. These hybrid protection capabilities ensure that traffic is not diverted unless it is absolutely necessary. As a result, the organization is fully protected and time to mitigation is measured in seconds.

Attack Vectors
Over 100 attack vectors on the network and application layers are detected and mitigated including:

Radware's attack mitigation solution includes active monitoring and health checks on the protected service or application. In addition, the system performs pipe saturation monitoring and customers are notified when there is a risk for saturation and action is required.

Ongoing reports regarding all attacks that were mitigated by the system (automatically mitigated or invoked) are available for viewing on a web-based service portal. When Radware's ERT is involved in mitigating an attack, a full post attack analysis report is provided to the customer.

Radware's solution includes 24x7 ERT support for hands-on attack mitigation assistance from a single point of contact. The ERT provides expertise needed during prolonged, multi-vector attacks. This includes working closely with customers to decide on the diversion of traffic during volumetric attacks, assisting with capturing files, analyzing the situation and ensuring the best mitigation options are implemented. The ERT's experience with fighting the most widely known attacks in the industry provides best practice approaches to fight each and every attack. 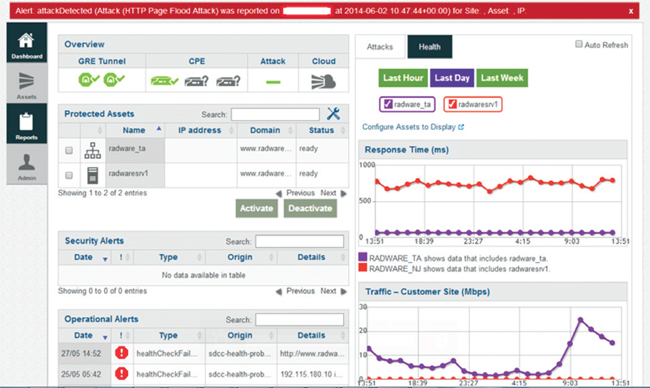 A messaging mechanism enables Radware's WAF to signal Radware's perimeter attack mitigation device when a web application attack is detected and needs to be blocked at the perimeter, protecting the rest of the network.