Radware offers three use cases with DefenseFlow attack detection and cyber control and command along with DefensePro for out of path DDoS attack defense and mitigation:

Suitable for the Current and Future Carrier Environment
Investment protection due to DefenseFlow solution that supports both NetFlow and software defined networks (SDN).

Legacy DDoS protection services that make use of scrubbing centers are costly because they need hardware detectors in every network location, BGP for traffic diversion, and GRE tunnels to forward the traffic to its designated network object. With SDN, a DDoS protection solution turns into a software application that adds intelligence to the network. There is no need for additional hardware, BGP or GRE operations, which is a great cost reduction opportunity for operators.

While alternative approaches require static provisioning of security systems throughout the network and sized according to the protected network capacity, DefenseFlow leverages the entire network combined with ondemand intelligence of network, application and APT recognition algorithms, by using only the exact amount of resources needed, at the optimal network location in order to identify and block various attacks at various sizes.

The solution is an evolution of the DefenseFlow Network Behavioral Analysis (NBA) solution, adding to it an Application Behavioral Analytics (ABA) Component as well as an Advanced Persistent Threat (APT) Detection Module. In order to formulate a consistent and actionable behavioral baseline, and identify deviations from this baseline at the application behavior and APT levels, several implementations of patented behavioral analysis mechanisms are used. These mechanisms define real-time application and network attack signatures most effective against modern zero-day attacks. Furthermore, the ability to scale intelligent application level attack detection engines on the fly and distribute traffic across these engines intelligently (leveraging SDN) is pending patent under the Radware ElasticScale network services framework.

The illustration outlines various capabilities of the DefenseFlow solution by showing the following elements: 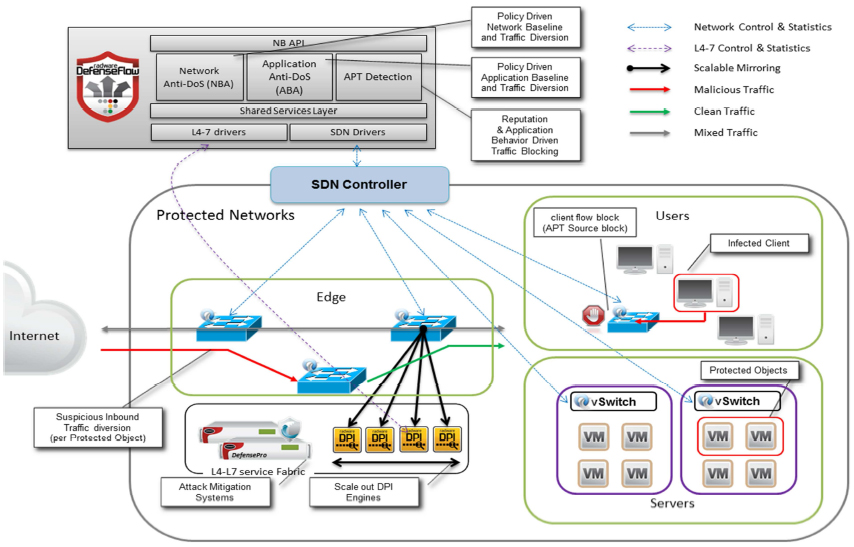 The DefenseFlow Adaptive Network, Application and APT Protection solution leverages the field proven Radware Attack Mitigation System mechanisms, in form of an SDN application, together with SDN to enable cost effective and scalable Attack Mitigation capabilities for organizations. The solution addresses a broad range of security threats from network DDoS through Application DDoS to APT offering organizations one of the most cost effective solutions to mitigate organizational risk.

DefenseFlow is a perfect example of how SDN changes existing network service architectures to employ a collaborative mechanism in which network and L4-7 systems interact and increase value to end user. This is done by changing the network role from hosting services - to being part of the service - in this case offering increased security protection. DefenseFlow is the only solution that addresses the dynamic nature (unknown type and scale) of Attacks and brings the dynamic capabilities of SDN to mitigate the associated risks. Furthermore, as opposed to other available solutions that offer new API's to program existing systems. DefenseFlow is a clear showcase of how SDN offers immediate value to organizations that run business critical networks.