Radware DefensePro 1016 OnDemand Switch 2 S1
Up to 1 Gbps throughput
Call for Pricing!
Get a Quote

Radware DefensePro 2016 OnDemand Switch 2 S1
Up to 2 Gbps throughput
Call for Pricing!
Get a Quote

Radware DefensePro 3016 OnDemand Switch 2 S1
Up to 3 Gbps throughput
Call for Pricing!
Get a Quote

Protect the Data Center and Network Against Emerging Network Threats

In today's info-security threat landscape, denial of service and distributed denial of service (DoS/DDoS) attacks are a major cause of network downtime. Whether executed by hacktivists to draw attention to a cause, fraudsters trying to illegally obtain data or funds, or a result of geo-political events, DDoS attacks are a destructive cyber weapon. Governments, utilities, financial services and commercial institutions face daily attacks.

Attacks are becoming more sophisticated and increasing in severity as they bypass traditional cloud and CDN protection services to target an organization's IT infrastructure and critical applications. The graph below from Radware's 2014-2015 Global Application & Network Security Report highlights a new trend: the rise of constant attacks against organizations.

The simplicity of launching cyber-attacks and variety of attack tools available are reasons why organizations suffer from increased attacks, such as DDoS. It is no longer about preventing attacks, but rather how to detect and mitigate them.

Cyber criminals don't keep regular hours. Instead, they work around the clock to find and exploit holes in your network. You need comprehensive enterprise network security designed to meet today's ever changing security challenges.

The Accuracy of Inline, the Scalability of Out of Path

DefensePro devices can be deployed inline or out-of-path (OOP) in a scrubbing center to provide the highest mitigation accuracy within the shortest time.

Based on standard signature detection technology to prevent the known application vulnerabilities, DefensePro consists of patent protected behavioral based real-time signatures technology that detects and mitigates emerging network attacks in real time such as zero-minute attacks, DoS/DDoS attacks and application misuse attacks ― all without the need for human intervention and without blocking legitimate user traffic.

DefensePro is a core part of Radware's next generation Attack Mitigation System (AMS) a set of patented technologies designed for the most advanced internet-borne cyber-attacks. AMS extends the "network" of attack detection and mitigation capabilities beyond the data center for:

Tools, servers and applications need protection within a virtualized environment

With the proper DoS protection system in place, organizations no longer need to be concerned with the possibility of network disruptions. DoS attacks flood a network with excessive amounts of traffic for the sole purpose of causing network damage.

Protect Your Data Center and Network against Emerging Network Threats

Recent attacks in 2009 and 2010 such as the July 2009 cyber attacks and Confi cker malware have left many organizations vulnerable to Botnet attacks, zero-minute attacks and more – even when deploying one of these tools. The conclusion is that there is no single tool that can handle today’s emerging network attacks – until now. 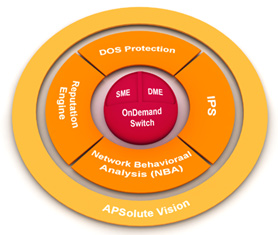 The synergy of multiple protection modules on the same platform enables more effective protection against attackers who seek to compromise the business assets systematically when compared to stand alone solutions deployment, while providing unifi ed reporting and compliance.

APSolute Vision™ accompanies our DefensePro APSolute attack prevention with an enterprise-wide view of security and compliance status from a single console. Data from multiple devices is collected and evaluated in a consolidated view of dashboards and reports. These views provide extensive yet simple drilldown capabilities that allow users to easily drill into information to speed incident identifi cation and provide root cause analyses, improving collaboration between network operations center (NOC) and security operations center (SOC) teams, while accelerating the resolution of security incidents. 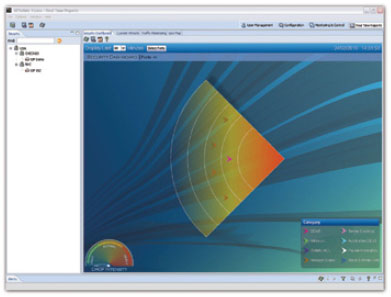 The real time sonar view allows you to see current attacks in your network. High risk attacks are
located closer to the sonar transmitter. The side meter indicates the drop intensity of attack traffic.

Best security solution for data centers in a single box

Most accurate attack detection and prevention

DefensePro devices can be deployed inline, out-of-path (OOP) or in a scrubbing center to provide the highest mitigation accuracy within the shortest time. Each deployment mode offers the same performance as an inline device.

With DefensePro deployed either inline or out-of-path as well as in a scrubbing center, the devices are able to communicate with each other in real-time to collect automatic updates of normal traffic baselines, detect behavioral patterns and obtain attack footprints. This constant real-time flow of defense messaging enables DefensePro to provide accurate and instant mitigation without the need to learn this information when an attack occurs.

Deploying DefensePro devices out of path or in a scrubbing center is the most scalable and flexible solution as it is based on the maximum attack mitigation capacity needed, without being limited by the actual network physical topology.

DefensePro device deployed inline in the enterprise perimeter to detect/mitigate attacks in real-time;
scrubbing center invoked for mitigation of volumetric attacks that threaten to saturate the internet link.

DefensePro deployed out-of-path for attack detection; suspicious traffic is diverted
to the deployment with scrubbing center for attack mitigation.

Unique messaging assures that each component provides information about traffic baselines and real-time signatures to the others, so that all system components have full visibility into all information.

Through this messaging, Radware's attack mitigation solution can detect attacks where it should and mitigate attacks where it's best. For example, the system can detect a volumetric attack at the network perimeter but mitigate it in the cloud. This automatic, real-time feature enables organizations to scale the mitigation capabilities of the solution by moving mitigation as far as possible from the application infrastructure.

Upgrade options are available from model 1016 and up to 3016

1 Throughput is measured at the egress of the DP and includes only legitimate traffic (Dropped packets are not calculated in the license).
2 External fiber fail-open switch with SFP ports is available at additional cost.
3 Overload mechanism is designed to obtain maximum security coverage under extreme traffic loads.

Radware DefensePro 1016 OnDemand Switch 2 S1
Up to 1 Gbps throughput
Call for Pricing!
Get a Quote

Radware DefensePro 2016 OnDemand Switch 2 S1
Up to 2 Gbps throughput
Call for Pricing!
Get a Quote